“I don’t believe there’s a challenge anywhere in the world that’s more important to people everywhere than finding solutions to the problems of our cities. But where do we begin… how do we start answering this great challenge?” -Walt Disney

EPCOT, or the Experimental Prototype Community of Tomorrow, began as Walt Disney’s idea of 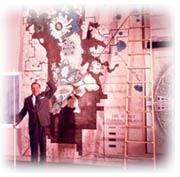 creating a better city. A utopian environment enriched in education, and in expanding technology. A perfect city with dependable public transportation, a soaring civic center covered by an all-weather dome, and model factories

concealed in green belts that were readily accessible to workers housed in idyllic suburban subdivisions nearby.

The idea of having a perfect city was one of Walt Disney’s last projects. Before his death, in late 1966, Walt had bought up thousands of acres in central Florida, for an East Coast Disneyland, Walt Disney World. But all this was leading up to Walt’s true vision, a city without dirt, without grime, an experimental prototype city.

EPCOT. Disneyland is a perfect example. Its 25 foot Earthen Berm protects it from the outside world. With clean streets, and walkways, Disneyland was Walt’s first idea to have a better city, not like the 1950’s Los Angeles where Walt worked and lived.

Plans for the Florida Project, “Project X,” were being designed in a special room at the Disney Studios. This “Florida Room” had high ceilings and padded walls for pinning up plans. This room is where master plans were created for EPCOT, as well as Walt Disney World.

“EPCOT,” is an acronym for Experimental Prototype Community of Tomorrow. WED Designer Marvin Davis said Walt created the phrase, he thought it was just right.

Shortly before Walt’s death, he made a film showcasing this new city. Before the filming he gave his

presentation to a few friends, and afterwards asked “does this sound like a city you’d want to live in?” In the final product the EPCOT movie was a model for solving “today’s city problems . . . through proper master planning.” The movie continued, although, the city on the film was just a set, with a series of maps and charts. With a strong rhetorical image of wholeness, harmony, safety, and underlying order.

Unfortunately the EPCOT Walt Disney envisioned was never created. Walt Disney died of lung cancer at the hospital across the street from his studio. Work on EPCOT continued with fresh intensity. Although, the team would have to rely on the past thoughts from Walt; before Walt would come into the Florida room 2-3 times a week, bringing fresh ideas, and new excitement to the bunch. Marvin Davis recalls how “he designed the whole traffic flow around EPCOT on a little napkin.”

Roy Disney, Walt’s brother, was troubled by the thought of building a city. What did a Movie Studio know about water lines, power cables, sewer systems, and municipal government? When Marvin Davis presented his plans to Roy, they met with a sad, simple, answer. “Marvin,” Roy Disney spoke, “Walt’s dead.” So was the city known as EPCOT. So, plans then were shifted, first, to a Disneyland East- Magic Kingdom Park- a taller, and bigger park. Then a series of hotels, located on the edge of the property, to keep out unwanted intrusions.

Even though Walt’s dream of an Experimental Prototype Community of Tomorrow was never developed, a World’s Fair type EPCOT does now exist. Although, a city truly new and experimental was designed, and is located on the Disney World Property, Celebration Florida is where remnant of EPCOT now resides. One wonders, what if Walt lived longer, would there have been an EPCOT? This question is inevitably unanswerable.