By CupcakeBria on September 25, 2016 in Reviews 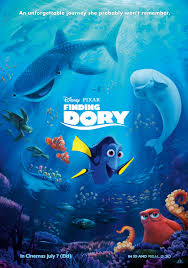 I recently saw Disney’s new movie Finding Dory. Finding Dory was the sequel to Disney Pixar’s Finding Nemo. Every child always has that one movie that they constantly watched, like at least five times each day, and that move for me, was Finding Dory. So you can only imagined how excited I was to witness the sequel to my long beloved favorite movie, the only upsetting part was that I had to wait two whole years to see it. When the wait was finally over I used discounts from granola bars for five dollars off movie tickets to book our spots, so as soon as seats were available me and my family bought 4 pre-tickets to go see the movie.

Overall I thought the movie was pretty good, but I honestly think it could’ve been better. I loved the addition of the new characters like Dory’s parents and Destiny, but self-centered Bailey annoyed me a little bit. Hank the charming septapus was also a pretty neat addition to the story even though he seems to only care for himself, he really does have a good heart and went out of his way to help Dory.I also love that Nemo was incorporated as one of the characters in the film. Dory’s backstory also gave the story a little bit more heart. It was such a sweet movie and I think that all people , even adults should see this movie because of the remembrance it brings to the depths of the ocean in Finding Nemo.

My favorite part of the movie was when Dory was reunited with her long lost parents who had been making nearly endless shell trails back to them in case Dory stumbled upon them to lead their forgetful little daughter back to them. It was an extremely heart warming part of the movie and was great. Another part of the movie that I also enjoyed was when the marine animals took over the truck and drove over the edge of a cliff in an exciting few minutes. Overall I would rate this stunning movie with beautiful animation a 9/10, and would recommend this film to people and Disney fans of all ages.