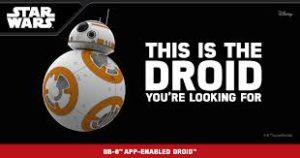 Have you ever watched the new star wars movie and thought ” i wish i could have one of the droids from the movie “, well now you can. Sphero has created a brand new type of interactive droid from star wars the force awakens. This spunky droid has a one of kind personality, and can even roll around on his own. He also has many more funny and cute interactive modes and abilities.

One of BB8’s five features is drive mode. You click the mode on your mobile device and it takes you to a screen where you can move the video game like controller button to send BB8 wherever you wish. With this feature you can also turn BB8’s head and have him do many other activities such as nodding yes or no. If you put the sound up on your device you can even hear BB8 sound effects that correspond with BB’s movements.

Another feature on the BB8 app is holograph. The app needs permission to access your camera so it can take lifelike pictures and videos of the “hologram”. When you touch the hologram section it brings up your camera, then it will ask you to choose a hologram. BB8 doesn’t actually project the holograms, they are just added to pictures and videos, but if your turn up the volume on your device sound affects will be added.

The third feature of BB8 is “watch with me mode” , where BB8 will view and react to Star Wars The Force Awakens as you view the movie together. To participate in this mode BB8 must be set up on his charger port which has to be plugged in, along with your device so the battery won’t die on the droid or your device during the film. You can exit the app during the film or else BB8 will stop reacting.

Another feature of BB8 is patrol mode where he will go off on his own adventures. While “patrolling” BB8 will scour the area using sensors to avoid anything in his way. It’s pretty funny watching the droid go off and do his own thing, just wandering about.

The last mode for BB8 is settings. This is where you can control and edit things like language and speaking. You can toggle with the voice activation setting where you record yourself speaking on the device and BB8 will then respond to some of the things that you say.

BB8 by Sphero comes with ti’s own unique charger port where you place him on, and he lights up whilst charging. The charging stand comes with a USB connecting cable to hook up to a computer to charge the droid. Along with the cute charging port BB8 has an even cuter magnetic head which is how it stays on the base of the droid! This BB8 by Sphero measures at about 11cm comparing to the BB8 in the movie with a height of 67cm, making the Sphero droid about 6 times shorter than the real thing! Overall i would recommend purchasing the BB8 droid by Sphero because he’s so cute and just like the real thing, only smaller!