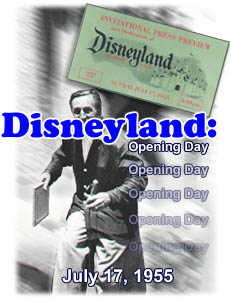 July 17, 1955, otherwise called “black Sunday,” was Disneyland’s first day of operation. Imagine the day. It was clear. Not a cloud in the sky. A slight breeze. Hot. Very hot! One of the hottest days of the summer.

The day was mainly set as a “preview.” Press personal, special celebrities, and dignitaries were invited to attend. Those people would be greeted by Walt Disney. That small little group ended up being a very large mob.

“Our official records indicate that there were 28,154 guests in the Park that day, and I’m not one to tamper with somebody’s estimates” noted Van Arsdale France. Van was at the park on opening day.

Not that many people were invited. Some guests cleverly were able to forge Disneyland invitations. 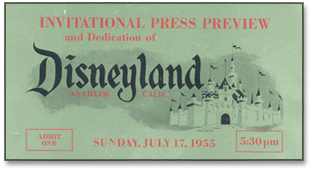 Original Disneyland opening day invitation* Ticket (C) Copyright Disney
It was pandemonium. With 28,000 people in a place that hadn’t been made for that many, people were clumped together. People were hot, and frustrated at the large crowds. Someone forgot to lock the doors on Sleeping Beauty’s Castle, so people were rummaging through it’s innards. It was empty inside, just a shell.

Rides broke down after their first few runs. Disneyland restaurants and snack carts ran out of food and drink. To add to all this, a gas leak in Fantasyland made the entire area closed to the public. The Mark Twain steamboat’s deck was nearly level with the water of the Rivers of America; there were so many people on board.

Walt Disney didn’t see all this at opening day. He was being rushed around Disneyland in order to host Disneyland’s live Television broadcast. The whole opening day was completely televised. Walt read about the opening day fiasco on the next day.

Even though opening day was a mess, the park learned from it incredibly. They saw how people moved through the park. Could now account for proper ride capacity, and could plan to accommodate many guests.

Nametags (C) Copyright Disney
Walt fixed his relations with the press by inviting them to special dinners, and night engagements at the park. He came to every one of these gatherings.

Within several weeks, a million guests had visited Disneyland. Attendance estimates increased by 50 percent. Disneyland was destined for financial success!

This couldn’t have made Walt Disney more happy. People would often find Walt walking around the park. He would ask everyone questions. He’d ask how they liked things, what they thought about this and that. He always wanted things clean. He told his staff once “If you keep a place clean, people will respect it; if you let it get dirty, they’ll make it worse.”
Hard to believe that such a terrible day could lead to such a wonderful future. Happy 46th Birthday to Disneyland! July 17, 2001