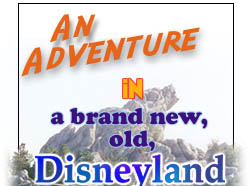 PART 1 | 2
So, shortly after Westcot was shot, Eisner called a meeting to create this new second gate. What will it be? It can’t compete against Disneyland, it can’t be too flashy (like Westcot), and it needs to make money. Imagineers thought up a Hollywood theme park, which seemed odd because people could visit Hollywood if they drove 30 miles north.

The Imagineers considered another angle for an idea. After people leave Disneyland, they go either: A: home or B: to more sightseeing in California. California!?! For a moment, the Imagineers & Eisner thought they had a great idea… “let’s do it” Eisner said!

Thus, on July 17, 1996 an announcement was made stating that “starting in 1997, construction will begin on Disney’s new ‘California Adventure’ theme park.” (you can read the press release, by clicking here)

As construction began, 55 acres of Disneyland’s parking lot was plowed away. Revealing soil beneath it, which hadn’t seen sunlight for 41 years!

The park design grew into having it divided into 9 “districts”

The following is an aerial view of Disneyland’s parking lot (from October 3, 1995), with an overlay comparison of Disneyland Resort expansion. 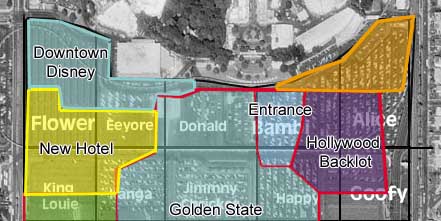 Check some other California Adventure websites: