Over the the past few months, we’ve collected some interesting views of the backstage areas at Disneyland. This series of photographs was taken from Disneyland’s “Mickey and Friends Parking Structure.” 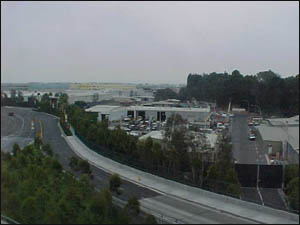 A view over Disneyland drive. The trees on the right are part of the far northwestern part of the park. The Disneyland railroad, and the Rivers of America are directly behind them.

This aerial photograph (taken in 1996) shows the area,
as seen from the air. Since 1996 the area has changed a bit. For example, in the upper left hand corner, the new “Mickey and Friends” Parking Structure has been constructed. Not to mention, some backstage changes too. 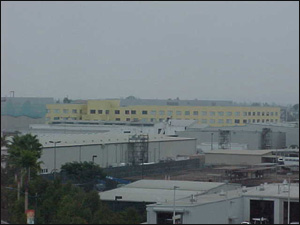 This yellow building is the headquarters for the Disneyland Resort. Called “Team Disney Anaheim” the 4 floors of this building hold many of Disneyland’s backstage cast membrs.
The two warehouses directly in front of Team Disney Anaheim (TDA) are responsible for storing items for Disneyland. Parade floats, Christmas Decorations, etc. 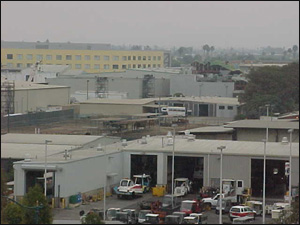 Directly in the center of this photo… this is the area called “Circle D Ranch.” This is where Disneyland keeps the horses used on Main Street. 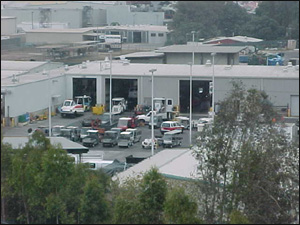 This building, as we observe, seems to be a maintenance area for Disneyland transportation. Trams for parking lots, small golf-carts, and other Disneyland vehicles.
Our next photo is as if looking back in time…. 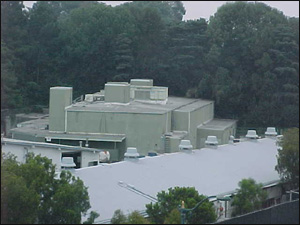 This is the green show building for the Country Bear Jamboree. This photograph was taken on the last day of its operation. This building will be used to house a new darkride featuring Winnie the Pooh.