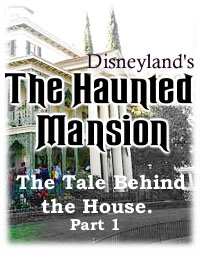 In 1952 Disneyland was still being drawn out on paper. The land hadn’t even been purchased yet. Sketches illustrating this fantasy world were being shown to bankers, and other interested parties for financial support. Remember, Disneyland was something new, the ideas that Walt Disney and his “Imagineers” didn’t seem possible.

In one of these sketches appeared a classic Main Street, a church, and Haunted House. The idea for this Haunted House originally placed it on a top of a hill, similar to that used in Alfred Hitchcock’s “Psycho.”

Ideas for what was inside this Haunted House begin in 1957. Ken Anderson was given the job of creating an attraction for all the ideas that had been proposed. Anderson knew that this new building would be built in a new area of the park near a New Orleans / Frontierland mix. This house would be placed near the Rivers of America, keeping the theme in with America.

Sketches and paintings were created showing a vine covered southern style “mansion,” with a fence surrounding the home, next to a graveyard. Original sketches displayed a run-down home. Walt Disney didn’t like the image of a forgotten and ravaged old home. He said “we’ll keep up the grounds and things outside, and the ghosts can take care of the inside.” 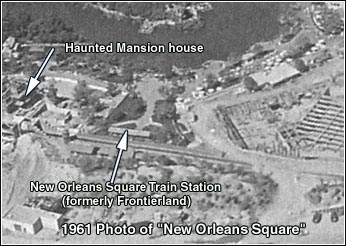 Upon the construction of “New Orleans Square” in 1961, plans for the “Mansion” exterior were drawn up. The exterior of the Haunted Mansion was built in 1963, but plans for the inside were yet to be decided. At this time, Disney was involved in the 1964-65 New York World’s Fair, and most construction on attractions at Disneyland were halted.

After the Fair, however, Disney could finish all the projects which had been started. New Orleans Square finally opened on July 24, 1966. Yet the Haunted Mansion still remained empty.

It was originally planned for the Masion to be a walk-through attraction. Groups of 40 would be lead through the home, and tell the story of the former owners. This idea was scratched out. Disney learned that a walk-through type attraction would be low capacity. So the idea toward a high capacity ride was taken into consideration.

After the 64-65 World’s Fair the design of the Mansion was significantly changed. Marc Davis and Claude Coats were put in charge. They made the decision to make the ride “high capacity” by using the same ride vehicles as used in Tomorrowland’s “Adventure Through Inner-space.” The former Atom-mobiles (now Doombuggies) would circle the ride track continuously. This system, called the Omnimover, would allow large numbers of guests to be transported through the Mansion, while designers would have full 360-degree control over which direction and view guests saw.

The attractions main theme song “Grim Grinning Ghosts” was composed by Buddy Baker, while lyrics for the main part of the ride were created by legendary X. Atencio.

Even though The Haunted Mansion is 31 years old, it still remains one of the Park’s most popular attractions. People enjoy passing through the brick gates, into the well kept manor. Reading the humorous gravestones, and finally entering the mysterious home. Stepping into a room that has “no way out.” This is truly a unique attraction which can only be found at Disneyland.