The Enchanted Tiki Room exhibits Walt Disney’s first use of Audio Animatronic figures, a wild, and

Through the years, Walt had toyed with the idea of three-dimensional characters at Disneyland. At one

time, he hoped to create a Chinese Restauraunt featuring a Confucius-Style mechanical man, that would speak out words of Wisdom.

Early concepts of “Audio-Animatronics” were featured in the Jungle Cruise, and Natures Wonderland.

In essence, the process of “Audio-Animatronics” electronicly synthisyzes and combines voices, music, and sound effects, with movement of animated figures.

Originally, in it’s conceptual desgin, the Tiki Room would be staged as a Dinner, and

show, attraction. Although, WED designers scrapped the idea, because this type of attraction wouldn’t work at Disneyland

What was left was a 17-minute revue with a full Audio-Animatronics cast. The Enchanted Tiki Room,

The show was originally sponsored by United Airlines. A strange sponsor you say? Not at all, if you

consider that Hawaii was just recently made a state at the time, and people were flocking to the Islands like crazy. United was doing a special Hawaiian promotion , and partnership was perfect. The show is now sponsored by Dole Pineapple.

The Show starts even before you begin, a wonderful pre-show greets guests waiting. The pre-show sets

the stage for what’s waiting inside. During the pre-show guests watch the powerful Tiki Gods, Kor, Maui, Pele, Rongo, Tangaroa, and Tangaroa-Ru. Once inside the Tiki Room your greeted by guides, which happen to be talking birds- Fritz, Jose, Micheal, and Pierre.

The show itself is full of wonderfuly coriagrahped music, themed to the acording topic, Hawaii. The

music, songs, and lyrics were created by the famous Sherman Bros, Richard and Robert. Musical acts include: include “The Hawaiian War Chant,” “Let’s All Sing (Like the Birdies Sing),” “Aloha to You,” and, of course, the show’s theme song, “In the Tiki, Tiki, Tiki, Tiki, Tiki Room”

Often Walt Disney would come and enjoy the show for himself. He would talk to guests, by asking “so . . 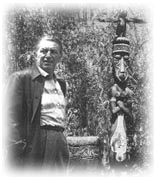 .what did you think of those birds?, that rain scene is something, huh.” Many people believe this was Walt Disney’s favorite Disneyland attraction. This was one of the last projects Walt contributed to in the park